Two projects on the go.
Neither is finished and one was started last fall.
Talk about procrastination.

The daylily and grass bed was expanded on either side last fall.﻿

The daylilies have become too crowded and the grasses have not been shown off to their best.  Also in the mean time, I have a few more of each that need a good home.﻿

I did not get them spaced this spring before things became so dry.  I'll have to wait till late summer or early fall to move them when soil moisture and cooler nights pervail.  I'll probably divide some of the grasses as I go, considering I sold out of most of the grasses I had.  Only have a few Var. Miscanthus, Pennisetum Moudry and a Karl Forester Reed Grass left. 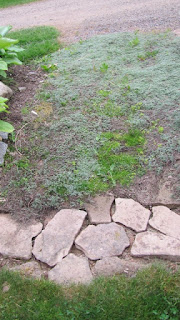 The other project was the Woolly Thyme walk into the Nursery.  The weeds (Dandelions, Plantain, Irish moss) have been persistant, and I did not have that trouble with the Creeping Thyme pathway.  Why would anyone grow and buy Irish Moss??  I am sure it has its place, but not in my Thyme.

As I started to excavate, I realized that there was a good inch or two of soil on the flag stone.  I can only guess that insects and earth worms have brought up the soil.  No wonder the weeds were taking hold.  I thought I would just remove each stone, scrape away the soil and replace the stone as I went up the bed.  That was going to take too long.﻿

OK, out with everything, all the stones where placed in the parking lot and the old soil and weeds removed.﻿


The Woolly Thyme grew so well that it has gone over the stone to the right and up a large rock into the cactus and semp bed.  At this time, I will leave it and use it to re plant the path.

I realigned the cobble stones and narrowed up the bed, the two Hosta needed to be spaced out a bit more on the left  (will move them this fall),  the pathway isn't used a lot so shrinking it, didn't hurt it.

I don't know if it is the right way or not but we just laid down a layer of sand and repositioned the stone on top.  Thyme will grow in anything.﻿

And it is good to have help.

We brushed more sand in between the cracks and allowed it to settle a bit.  It slightly washed in the previous rain storm last week and this afternoon it completely washed down.  Sigh,  I guess that means sweeping it back up. It's either drought or deluge.  As of 5:30 pm there was 2" in the rain gauge.

It looked good 2 days ago and it will again..  I'll update pictures when it gets planted and as it grows.

As a disclaimer, I can and am willing to be corrected for any miss identification of any insect mentioned in the proceeding observations. 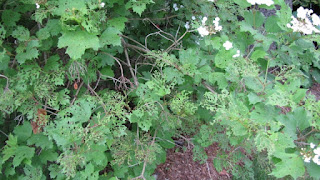 In general, I am not bothered too much by insects on our property.  We have the occasional problem with aphids (ant's farming) on the potted Sempervivums and Sedums, Mockorange and Burning Bush.  Sometimes the ants decide that a pot of perennials would make a good home.  It's nothing a little soap won't take care of.
Last year we pulled out a Snowball bush because I had enough.  It had leaf roller which caused the leaves at the tip of the branches to roll up and the leaves became skeletonized (not leaf roller).  It looked so bad for so many years, it had to go.  This year the High Bush Cranberry is being attacked.  Viburnum Leaf Beetle is skeletonizing the shrub.﻿ 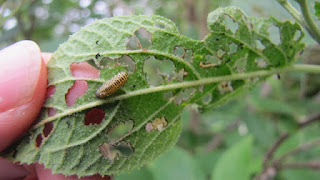 Both the larva and the adult feed on the leaves.  These are not the insects you want in the garden.  I don't like to spray and I feel that if something can't survive on its own it is gone.  I really don't want to give up on my Cranberry yet.  Control (organically) is by removing debris and searching for egg cases and pruning in the spring.  That sound like too much work.  To add insult to injury, these little guys are going to go into the ground and reemerge as adults who will continue to eat at the Cranberry. 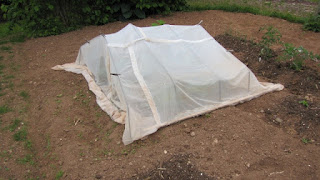 I have fixed my cabbage worm problem on the broccoli and cabbage by getting some curtain sheers at Louis (our Frenchys) and covering a frame.  So far that has been working very well. 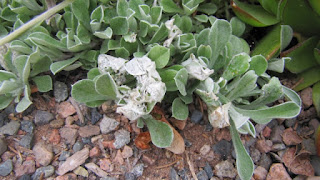 The pussy toes (Antennaria) had a caterpillar cocooned around its leaves.  It is very interesting in the garden but most customers don't want to see them on the leaves in the pots for sale.﻿ 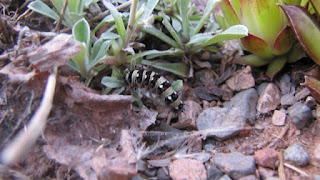 Most of them were quite small but I found this one on the edge.  I think it is the American Lady Lava.  And I had seen them earlier in the spring in the garden.﻿ 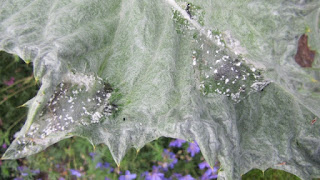 The Scotch Thistle always gets this webbing with a caterpillar inside chewing on the leaves and leaving little deposits.  I guess it depends on your point of view as to whether it is attractive or not.  But what is the point of a butterfly garden if there is not a bit of damage.  The larva need to eat.﻿ 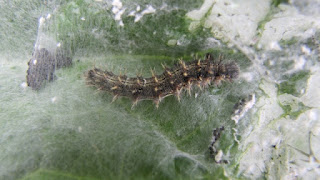 We are quite sure it is the Painted Lady.﻿ 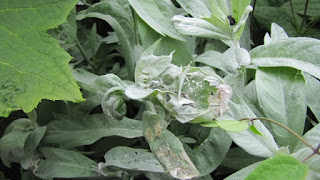 The Wormwood (Artimesia Valerie Finnis) plants are having their leaves curled, again, of course, in the potted plants. 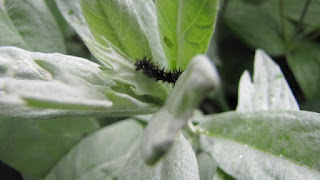 I have read suggest that it is the Painted Lady, and they really like the grey leaved plants.

I have the book 'Caterpillars of Eastern North America'  David L. Wagner, although it is a great looking book, the pictures and description are great, it really doesn't have a good Key for figuring out the moth or butterfly larva.  I have had more success surfing the web. 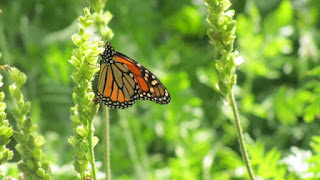 The Monarchs showed up last Friday, two of them.  They are still flying around.  When we first built our house back in 1991, within a few years, on my Butterfly Weed (Asclepia incarnata) we had Monarch larva.  The last time was about 5-6 years ago and they were on both on the potted plants and the plants in the garden.  Last year I did see one down in the woodlot, the butterfly, not the larva. 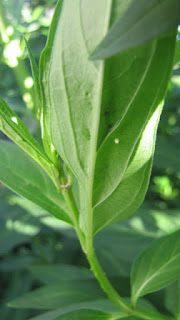 But this year, I have high hopes.

Posted by Woodlands and Meadows at 8:38 AM No comments: