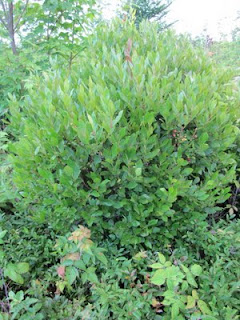 Last fall, Andrew noticed this plant over in our uncle's woodlot, next to ours.  I figured at that time, it might be a native highbush blueberry.  We kept our eye on it.  Late this spring it produced flowers very similar to blueberries.  Yes!  It was a highbush Blueberry.

Andrew was over the other night and brought back a few berries, they liked a bit like blueberry, similar in size but they were almost black.

OK, out comes the Flora of NS (old version but still good). 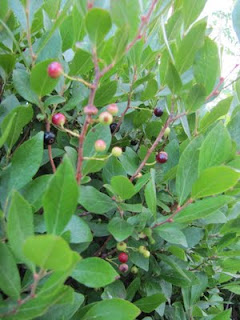 There are two species of Huckleberries in Nova Scotia.  According to the NS Wild Flora Society, Gaylussacia baccata (Black Huckleberry) is found in sandy, rocky barrens or on the edges of dry woods and lakeshores.  Our two plants that we found were on the edge of a 'sand pit'.  This is just a vein of sand that runs through the property.  I use the sand in my soil mix for my perennials and we have also use some in our vegetable garden to loosen up our clay soil.  The fruit of the Huckleberry is smooth, black or bluish and sweet and the leaves turn to a brilliant red in the fall.   There is also an abundance of blueberries and creeping blackberries in that area. 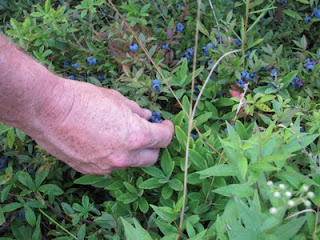 Back we go with the camera to take a few pictures and to just see what else was out there  We kept going on our tour back over to the cranberry bog to see how the cranberries were coming along.  There is going to be an amazing crop this year. I could have swore I took a picture of the cranberries but I can't find it anywhere even in the 'trash'.  I must be losing my mind.  The low bush Blueberries are quite abundant also and do they ever taste good. 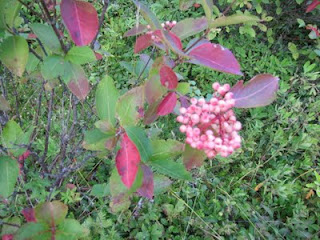 Every time I go over there we find something new, this is the area that we found the orchids.  There was an abundance of cotton grass (pictures blurry, not posted﻿) and may small Viburnum cassinoides (Witherod).  These, like the huckleberry, will turn colour in the fall.  I must try to collect some seed when the fruit turns dark blue.
There seems to be a streak of blue running through this blog, but that will change to red when the cranberries are ready.
﻿
Posted by Woodlands and Meadows at 11:10 AM No comments:

I am but an amateur in the field of Daylilies.  But I know what I like.

Helicon
My perfect daylily must be medium to large plant (I have a big property), must be brightly coloured (no washed out colours for me) and must bloom for a long time.  But I can make exceptions. 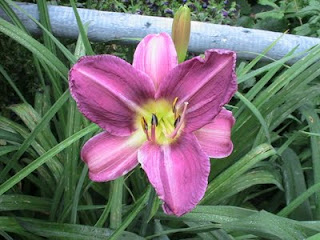 Prairie Blue Eyes
Daylilies are a diverse group on colour and form from many years of hybridization by both amateur and professional daylily breeders.  I don't know who has the most varieties, Hosta or Daylilies.  They emerge early in the spring with wonderful grassy leaves coming up at a time to cover the dying foliage of spring bulbs.  They are clump forming, are not aggressive spreaders and are easily divided.  Very low maintenance and work well in a perennial garden or with shrubs. The colours are amazing.  What more could you ask for.

Late July and Early August can be down times for colour in the garden, and this can be due to the fact that most people have finished buying and planting new perennials.  And the general public tend to purchase plants in bloom, there for they miss out on great plants for later in the season.  Serious gardeners know better.  Daylilies are just one type of plant that can fill this gap.  Some bloom earlier in the season and some later but the bulk of them bloom during this time. 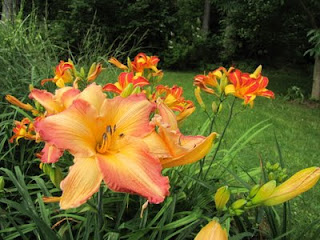 Jim's Pick (foreground)
Frans Hals (behind)
The Daylily is so named because the flower usually does not last more than 24 hours.  This does not make them useful in flower arranging but they do make good cut flowers because unopened buds continue to mature and open over many days.
They come in a range of colours from yellow to orange, all shades of pink and red, lavenders, green tones and almost black and almost white (but not quite).  Blues still elude the breeders although the name 'Blue' pops up in some varieties.
The old fashioned Tawny Daylily that many people would consider a wild or native plant is actually an escape from old homesteads.  Other names for it is Railroad Lily (Andrew likes that one) or Outhouse Lily (gee, where did they plant that one)
﻿ 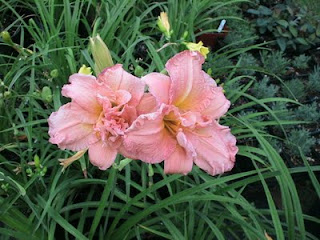 Dublin Elaine
Daylilies do cross pollinate easily, and I am not going to get into terms like diploids. tetraploids etc.....  I would have to look them up and try to interpret them (did not do well in genetics in school) and I will leave that to the professionals.﻿ They are constantly breeding for ruffles, doubles, colour, fragrance and reblooming or continuous blooming such as the Stella series. Name your combination, it is probably out there.
﻿ 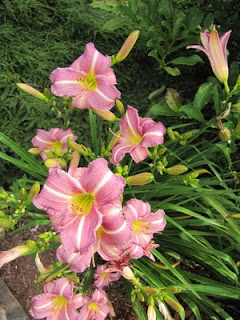 Seed Selection
I have played around with seed, purchasing some seed years ago from Garden's North.  I had a range germinate that were from lavender (see above) to reds, yellows and others.  This lavender is really nice.  I have not sold any yet, maybe next year, and I will need to find a name for it.  A daylily breeder would probably cull it out since the newer ones are more frilly or more exotic.  They have exotic prices too.
Posted by Woodlands and Meadows at 8:44 PM No comments: