In a Sea of Yellow

So we haven't seen the sun in 13 days (oh maybe just a glimmer here in Clifton). I would give it credit, it did try yesterday, maybe 3 times and it was warm for the 30 second it managed. Time for a serious dose of yellow.  Maybe we will shame that sun into burning through those clouds. 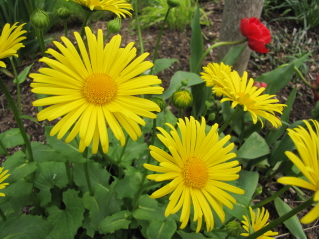 Nothing like a nice spring daisy, it is a shame that more people don't grow this one.  Leopards Bane (Doronicum) has nice apple green foliage first thing in the spring with blooms coming out in early May and holding on into June.﻿ 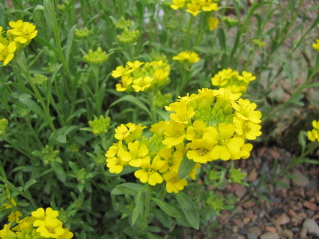 Alyssum has fallen out of favour in the last ten - twenty years.  You don't see it as much as you use to.  Maybe because it was so over used.  I found that if a property had one, they had a dozen scattered all over the place.  Basket of Gold was concidered a rock garden plant and no rock garden was complete without alyssum and creeping phlox.  These little guys belong to the mustard family, easy to tell that by looking at the clusters of flowers﻿.  Alyssum wulfenianum (above) is a nicer version, native to the alps it has deep gray foliage forming a low growing mound, completely covered in bloom by the end of the month. 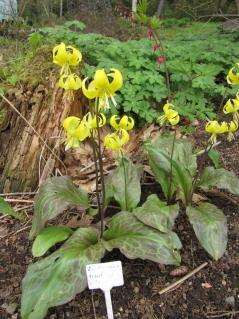 Our native Erythronium (Trout Lily or Dogtooth Violets)﻿ are little spring bulbs from the lily family.  The flowers are no more than 1" in diameter.  The above larger Erythronium is Pagoda, a hybrid bulb that may be purchased in the fall when buying tulips.  It may be 6-12" tall with 2 large brown-green mottled leaves.  Pagoda is one of those plants that disappears after flowering, so it is perfect for planting among hostas and ferns. 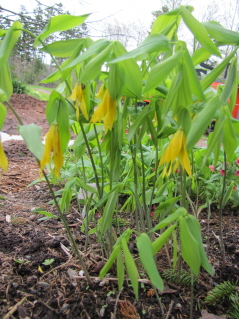 Uvularia is also in the lily family as is Solomon's Seal﻿ of which this little Merrybell reminds me of.  U sessilifolia is our native one which is slightly smaller than the above U. grandiflora.  Very easy to grow in a woodland setting. 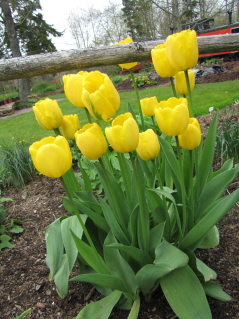 Don't forget spring bulbs like these Darwin Tulips (I guess only if you do not have deer).  Darwins are best, in my opinion, for coming back year after year and putting on a good display.  Other spring bulbs such as crocus, daffodils and winter aconite can give that burst of yellow early on. 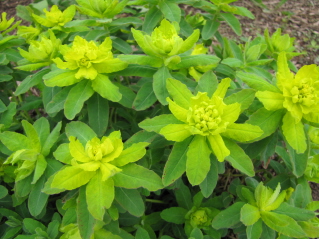 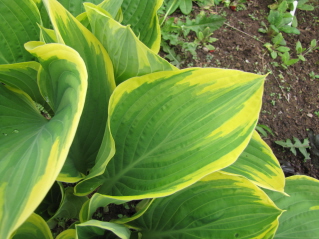 Don't forget plants that are grown for their foliage, there are many plants with yellow variegation﻿.  From Hosta to Solomon's Seal, Euonymus to Coral Bells. 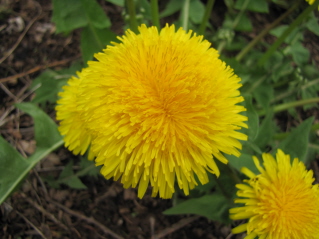 Ah, the lowly Dandelion.  This is a love/hate relationship.  You either like it (not many) or hate it.  Either way I must give it some respect.  Look at that colour, a perfect round head of bright yellow with shaggy petals.﻿  You can eat the leaves (high in Vit. A, B, C and D, Iron, Potassium and Zinc), the roots can be made into a coffee substitute and some parts of the flowers are made into wine.  What more do you need.  You can blame the French, English and Spanish for bringing them here.  They saw the benefits.
The plant is ingenious at survival, it is designed to act as a funnel to direct rain water to the roots. If broken off it has the ability to regenerate from a piece of root.   It has an abundance of flowers per plant with up to 200 seeds being produce on one flower. The seeds have a transportation system that can travel for more than 200 km (so it is not just your neighbours lawn that you need worry about). They are found world wide and are able to grow in all conditions. 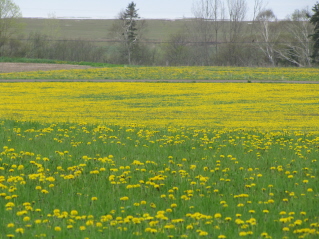 ﻿I know, 90% of you reading this is thinking that she is right off her rocker praising the Dandelion.  But I must give it some respect.  Which flower did you pick when you were a child.  Did you present your Mother or Grandmother with a Dandelion bouquet??  Didn't she gush with praise that it was the most beautiful flower ever??  And looking over a field, over a sea of yellow just adds some warmth to the chilly air.
Come on Sun, Where are you.
Posted by Woodlands and Meadows at 8:13 AM No comments:

Bogged Down by Rain, ...Literally 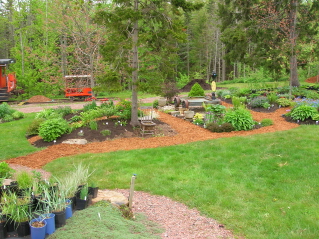 We must be out of our minds.  Another garden project, when I am busy trying to get everything plotted and laid out for sale.  Andrew wanted to remove the rail bed, trolley flat car that occupied the centre of the above picture.  The ties were starting to rot and he felt we should have something new in the garden.  And if he is willing to do the construction part, why not. 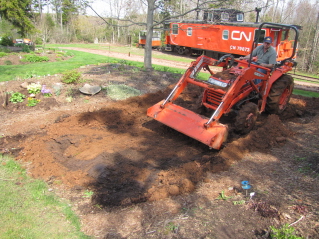 That bed was always the lowest part of the garden and held the plants that required more moisture anyway, but I was wishing for a true bog garden.  The Iris, Ligularia, Marsh Marigolds, Jack in the Pulpit and a few other moisture loving plants hung out in this area and did OK.﻿  But I also had a Picture Plant and some Skunk Cabbage that were struggling in another area.   So out everything went, and in goes the big equipment.  Boys and their toys. 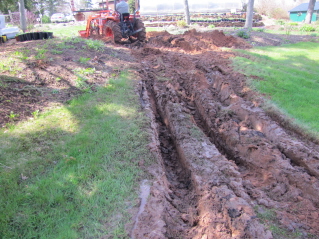 I think there will be a bit of lawn repair to do with a trip to the sod farm.﻿ 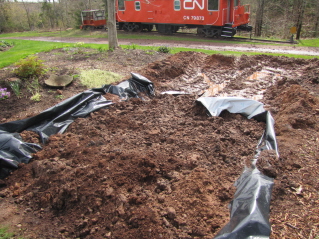 ﻿     We started the construction on Saturday morning.  Nice day, really, not too wet.  Dug down about 1.5' and laid down a heavy sheet of plastic.  Andrew poked some holes in the plastic for some drainage and we back filled with soil, peat moss and some sand.  I think it needs a bit more peat moss.  This picture above was taken Sunday morning after it had rained some over night.  I am a bit worried that we may have poked too many holes and it won't hold enough water. 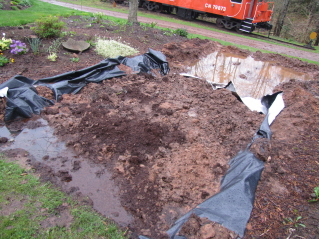 ﻿     Never fear and don't wish too loud.  This may be a very long and drawn out project if it doesn't stop raining.  We now have a pool at the back of the bog.  And yes the bog is a bit boggy.  I still think I will add more peat moss when I can get in. The rest of the garden is soggy.  Awful, who can garden in this.  I have actually liked the weather lately because it is very good for potting (outside), non of the plants are wilting. But enough is enough.  At least it is showing signs that the weather may be good for the first day of the Truro Farmers Market.  More later as the bog progresses. 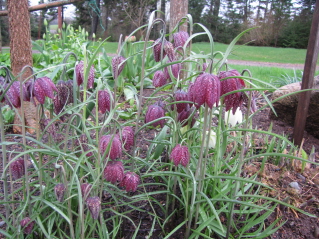 Fritilaria meleagris
Snakes Head Lily
Not really an attractive name although it describes it perfectly.
﻿ 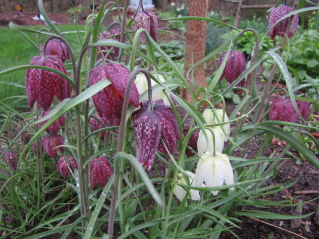 These are wonderful spring bulbs, growing 10 - 12", having 1 - 3 downward facing cup shaped flowers.  The flowers have a snake skin pattern  and comes in purple and sometimes white. They bloom just after the crocus and with the daffodils. Very easily grown  and can usually be purchased where you buy fall bulbs.   Last year I potted a few up in 4" pots and they came through the winter wonderfully.  People were asking for them for years.  Now I have a few for sale.  I must pot some more this fall.
Posted by Woodlands and Meadows at 8:43 PM 1 comment:

There is always something that needs fixed in the garden.  Andrew built me these rock walls to display my plants for sale probably 13 years ago.  He said he did not want to see wooden benches.  And I really like the natural feel it gives to the garden.  Anyway, the walls are holding up well, but they do tend to sag once in a while﻿.  This part needed rebuilt.
﻿ 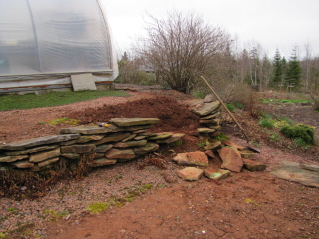 While he was removing stones he found two small salamanders which I removed to a new location down the wall.  Thank goodness it wasn't snakes.  Never have seen one in the nursery area even with the rock walls.  Nothing against snakes, they have their benefits, but if they started to come around, the wall would go. 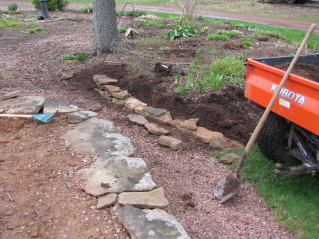 I talked about putting another small wall on the other side of the walkway, just to give it a more finished look.  Have been talking about doing it for years.  It only took 3/4 of an hour to do. 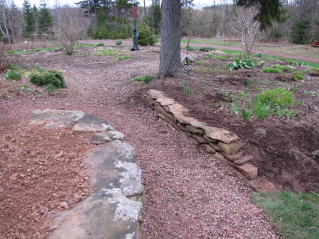 And it makes it look so much better.
After Andrew finish this wall, he took on another project.
More on that later. 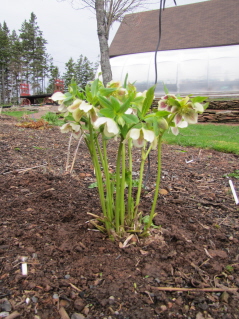 The Hellebours are blooming.
This one is called White Spotted Lady

Hellebours are sometimes called the Christmas Rose although they are not in the rose family at all.  They are an evergreen plant (leaves stay green throughout the winter) with the flower buds peeking through the ground as soon as the snow leaves in early April.  The current plant's leaves do not emerge until the plant is just past its peak bloom. 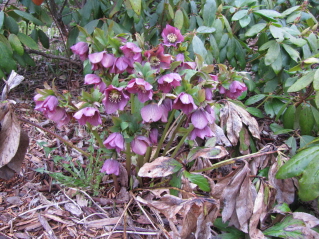 The flower has  5 petals that may be streaked with coloured veins or blotches.  Some varieties have double the amount of petals.  The flowers tend to fade a bit as they mature and set seed, but retain their form for many months.  It is very common to find many seedlings at the base of the plant the following season after it has bloomed.  It can take a few years for the plant to become established and put on a good show. 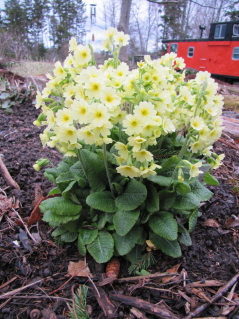 Primula elatior Oxlip
This proves you can always learn something new.  For years I have been calling this primula Oxslip.  In looking up some facts for primula's, I was surprised to find there is no 's' in it.  I have been miss pronouncing it for years.  These lovely little spring time blooming perennials prefer a moist woodland soil with spring sun.  They are one of the first primulas to bloom.  You can find primulas to bloom over 2 months.  Will write more about them later also.  Now I need to get back to the garden.
Posted by Woodlands and Meadows at 8:26 AM No comments: