The Empty Space Where You Once Stood...is Filled With a Hosta

Remember when the tree came down this spring?  ﻿I had all my mini hosta around the front of the tree.  The spruce had provided enough shade for them, but now, I wasn't so sure.

Looking back I did quite a bit of plant moving this year. 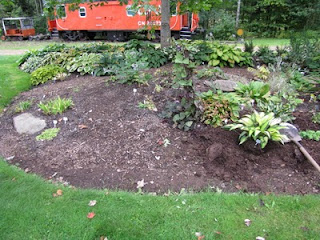 So out came the mini hosta this spring.  I was just making more work for myself.  The ferns, lungwort and a few other assorted plants were moved out to the edge of the bog making room for a mini hosta bed.

I had, of course, added to my collection﻿. 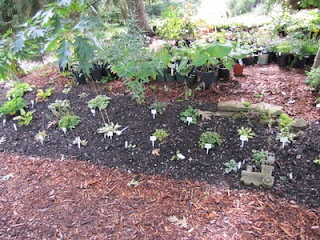 So no mini hosta, no tree.  What to put there.  Andrew and I talked about adding another tree.  Evergreen?  Tall? Short?  Couldn't decide.  Couldn't decide all summer﻿.  So I put in a few dwarf iris, clematis, cortusa, almost using it as a holding bed until I could figure out where they should really go. 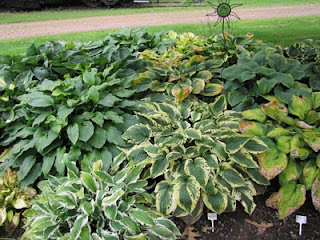 The main hosta bed, that was added to just last spring 2010 (grasses moved), had become too crowded.  One hosta just blended into another.  They needed spacing.  And because there were many very large ones (ie: T-Rex, Bressingham Blue, Big Daddy) in the middle and small (not mini) around the edge, the bed looked lopsided.﻿  I had toyed around with the idea of moving hosta that preferred more sun to that bed out front (ie: Pedmont Gold, August Moon,).  That bed does get more sun but I have a Kentucky Coffee Bean tree at the corner of the garden that in just a few years will cast a lot of shade on the area anyway. 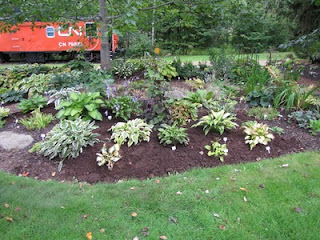 So out came the small to medium sized hosta (Citation, El Nino, Halcyon, Kathryn Lewis, Tatoo) and in they went in that small bed.  I think they look pretty good.  But I know that even by next year some of them may be too close together.﻿ 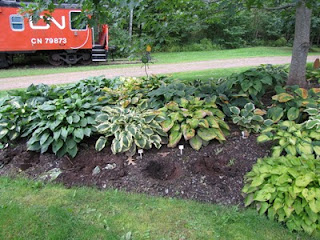 Now for the large hosta bed.  It looks like Swiss cheese around the edge.  All but 3-4 needed to be plucked out and shifted even a few inches, I tried to ﻿alternate the blue and solid coloured ones with the variegated types. 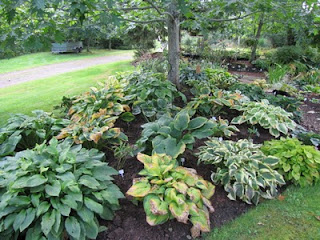 There, much better.  But I bet that by next summer it will need to be done again.  Some of those Blues have not reached their full potential yet.  There were still 2 large hosta in the upper garden that I could not﻿ accommodate in this bed.  If I expand it, it will be on the lower side toward the road.  But that is enough for this year.

Yet the grass and daylily bed is getting a bit crowded  and I do have new acquisitions of grasses to find homes for.
﻿
Posted by Woodlands and Meadows at 3:54 PM No comments:

There is nothing like a good flower show.  You know it's summer when the Exhibitions start and the exhibits are full of flowers.﻿ 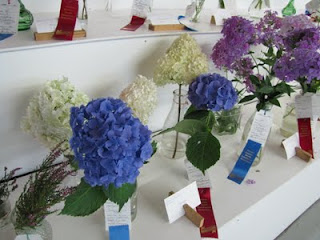 14 years ago, the was a need for Horticultural Judges﻿, I remember the dates because over the 2 years to train, I was both pregnant and a mother to my daughter.  At that time a call went out to garden clubs over the province to find people interested in being judges.  We learned everything from judging flowers (annuals, perennials, dahlias, gladiola) to various types of flower arrangements and vegetables.  In detail. 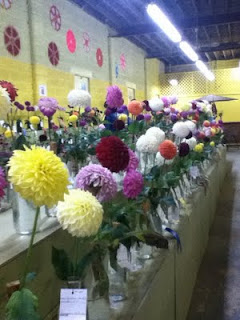 Over the years I have judged them all.  But dahlias make me nervous.  There are so many types and the exhibitors of dahlias are very competitive.﻿  Usually, in the major dahlia shows, they have their own trained judges.  That suits me fine.  Not saying I can't do them but in those type of competitions, we will leave it to the professionals. 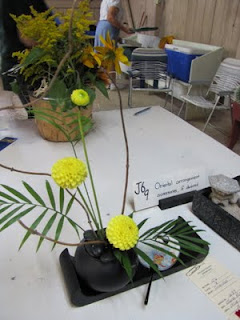 Flower arrangements can be very simple.
﻿ 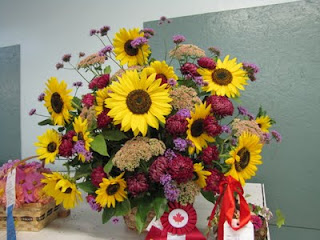 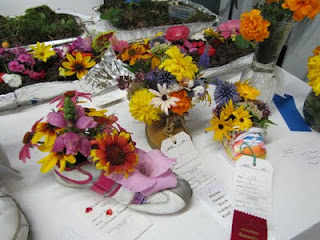 And there is nothing better than seeing the children enter.  I always try to write a short comment on the back of the tag.  They are the future of the exhibits.  I have encouraged my daughter and her friends to enter over the years.  Gill is always excited to come away with prize money.﻿ 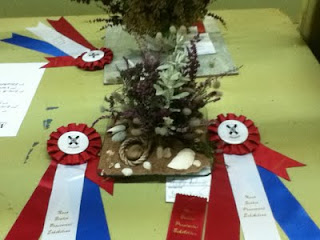 And some even manage to take home a few ribbons
﻿ 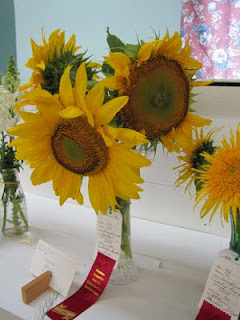 This has been a hard year for flowers, all the rain we have had.  Many of the annuals really took a beating.  The exhibits have been down in all the shows I have judged at and exhibited in. A lot of it can depend on the year.  This year I went over to my Uncles and found two beautiful Glads in his garden that I knew would place well.  One received best in the show (for that category); he was quite happy.
It takes a lot of volunteers to keep these shows going, as well as setting up, having people there when the exhibits are setting up to help people find the right categories, keeping everything fresh during the week and cleaning it up in the end.  In many cases it is a labour of love.  It brings great joy when they see the hall full of flowers.  Pick a few flowers next year and try exhibiting.  It really is a lot of fun.

Posted by Woodlands and Meadows at 10:13 PM No comments: