It is amazing what some real estate companies will sell.﻿ 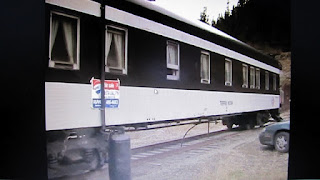 An acquaintance was in Newfoundland back 2004, she saw this train car by the road and she impulsively took a picture for 'her train loving friend'.
The Terra Nova II is a former Newfoundland Railway Business Car built in 1955 by the Canadian Car and Foundry for Canadian National. The Newfoundland Railway was closed down in 1988 and their railway equipment sold. The car operated as a self contained home and office for railway officials while out inspecting the railway lines.  At this time it was being used as a cottage in Trinity Newfoundland.
﻿ 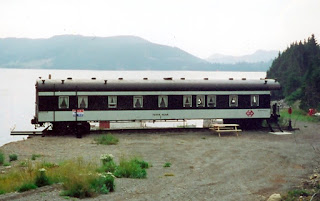 It seems that some people were interested in the property but not in the Terra Nova itself. Andrew always wanted a private car, but the price of them, not to mention what to do with it, was just out of reach. And the lottery didn't come in. But this was manageable.  We made an offer and it was accepted.  Now what did we get ourselves into.  The car itself was no problem to move.  No special height or width restrictions were required. 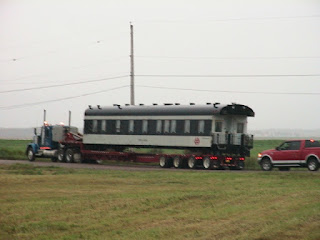 So in 2005, home it came to join the CNR Caboose we also have (I draw the line at an Engine, heaven help us if he does win the lottery).﻿ 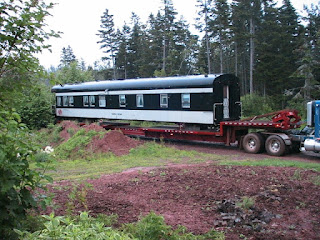 He spent the spring laying gravel and building track.  It came in on a low flat bed a crane lifted it, wheels pushed under and lowered it down.﻿ 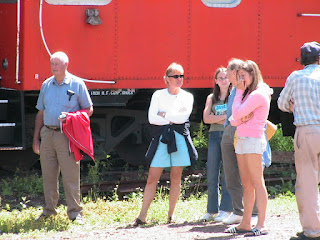 It was quite the attraction that day. 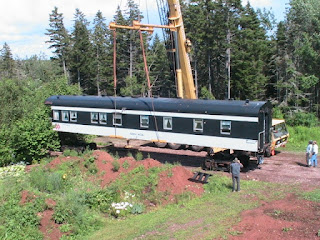 You will notice the mounds of soil this side of the car.  That used to be my vegetable garden.  Needless to say, I did not have one that year.
The only good thing about that was, that the previous year, potato bugs started to show up (we are quite isolated here), by skipping a year, I did not see potato bugs until last year (2011).  This year we put the potatoes at Andrew's Uncle's garden.  I can only hope that I can get another 6 years potato bug free.  I wonder if that would work for cucumber beetles?﻿ 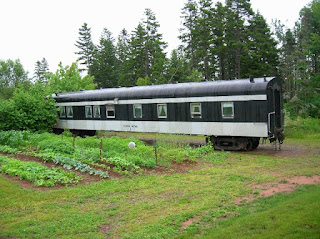 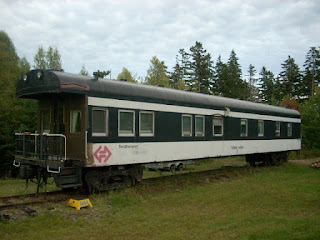 Andrew worked hard and by the following year, he had more track laid and the car was pushed down below the garden.  Anyone roaming through the gardens (flowers) were always surprised to see the railcars and would enquire 'How did you get those here?
What can I say, I garden. Andrew plays trains.  Can I help it if he likes the real thing??﻿

Posted by Woodlands and Meadows at 9:02 PM