Scotch Thistle (Onopordum acanthium) also known as Cotton Thistle, will not be found in many perennial books or guides.  It is in a class of its own.  As I have always told my customers, you either like it or you don't, and by the interest, may gardeners do.  However it comes with a few warnings.﻿ 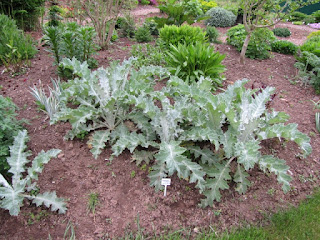 Scotch Thistle is a true biennial.  It forms a soft, spiny rosette of gray leaves the first year.  The centre of the leaves are downy soft yet when you touch the outer edges, they are as sharp as a cactus needle.  The plants forms a deep tap root making it difficult, but not impossible to move.  What you see is what you get the first year. 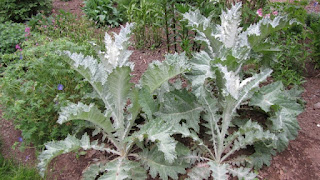 The second year the rosette elongates late may through June - July to form a large imposing, impressive thistle. 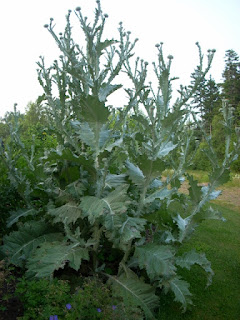 It is at this stage that my customers say 'wow, what is that plant?'﻿ 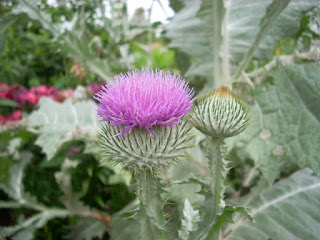 What I do, and what I tell my customers is that after it blooms, remove (with seriously tough gloves) all the flower heads but a few and alow the few to mature their seed.  When their seed is ripe, I remove the seed and line it out in a row where I have removed the mother plants.  The seed usually germinates in the fall but goes through the winter just fine.  In the spring, I place out what plants I want for the garden and pot up some to sell as 1st year plants.

Seed is their only means of reproduction.  The plant can produce up to 40 000 seeds. Don't put the mature seed heads in the compost.  In may areas it is concidered an evasive species.  But if you follow my advice above, you will have no problems.﻿ 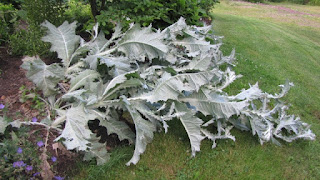 Tonight (June 27th), I came home  to find my beloved thistles lying over.  It had been rainy and windy the last few days.  This has happened in the past but not every year.﻿ 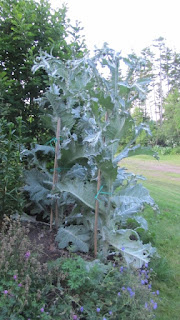 So we found some stakes and hauled them up.  As long as they remain till they bloom (any time) and the seed matures for another year.

Usually I don't take them away till mid to late August.

I think it will be much earlier this year and I may need a bit of filler.