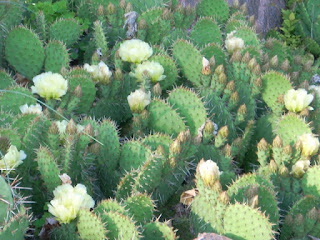 ﻿     So this picture of cactus must have been taken in the southern US.  Right?  Wrong.  This was taken at the Nova Scotia Agricultural College in Truro NS.  Although not native to the region, there are no native species east of Ontario, they absolutely thrive here.  Around here winters can go 20 below Celsius.  No problem for these cactus.
This is my last posting on cactus (maybe; for a while) and I want to highlight some cactus species that will grow here in our province and some I am currently growing.  I have given you the background on culture, propagation and care.  Now what varieties are available.
﻿ 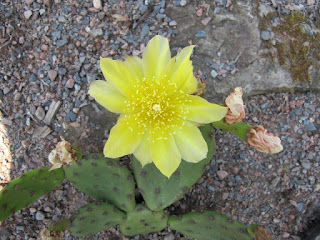 Opuntia humifusa also known as O. compressa is a large Prickly Pear Cactus found in Southern Ontario near Lake Erie﻿. it is an endangered species found only in 2 small locations near Point Pelee, Ontario. It is one of the most hardiest of all Prickly Pear Cactus.  For me though, I have yet to get it through the winter in my cactus bed.  Other people in the area have, and have had no problem.  It is one of the most prolific bloomers and grows quickly with very large pads.  The flowers are yellow to yellow gold.
﻿ 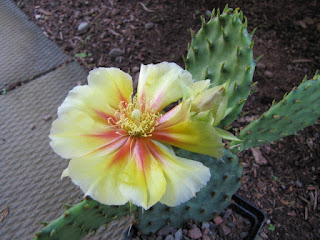 Opuntia macrorhiza is winter hardy to zone 3, keeping in mind good drainage.  It is the only Opuntia I have that is not native to Canada.  The plant is 6-12" in height about the same as O. humifusa.  It is native to the central and mid-west US through to the south.  It tends to be different from O. humifusa with thicker roots, more spines and those spines tend to be slightly curved (that does not make them any less lethal).﻿  Most O. macrorhiza are yellow blooms.  This variety that I carry, O. macrorhiza v. macrorhiza has a red centre that radiates outward.  Clumps can spread out over 2 feet. 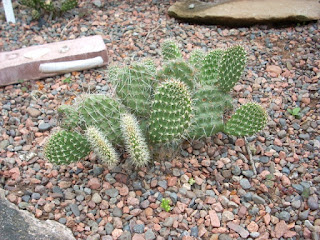 Opuntia polyacantha probably have the largest collection of hybridized varieties available.  One of the most notable is 'Crystal Tide' which  are porcelain white with red stamens and yellow pollen, but may other varieties range from yellows to pinks to red and anything in between.  Some varieties are quite small where as some get to 3' in diameter.  O polyacantha is winter hardy to zone 3 yet curl up and look almost dead in the winter.﻿ It is native to central - western US coming up into southern Alberta and Saskatchewan. It is know as the Plains Prickly Pear and can be cold hardy to Zone 2. 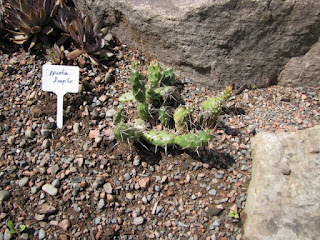 Opuntia fragilis; the Brittle Prickly Pear.  According to the literature, it is the most winter hardy of all the Opuntias, found as far north as the Artic Circle. They do not have large pads like the traditional prickly pear cactus but small 1-2" oval pads with spines that can be longer than the pad.  They are very abundant at producing new pads and it has, as the name suggests,﻿ the ability to propagate itself prolifically. You don't need tongs and a knife to separate these guys (well maybe the tongs).  The flowers are large and yellow with either creamy green or red centres.  They flower sporadically.   They are found from BC as far east as the Manitoba-Ontario border and down through the central US. 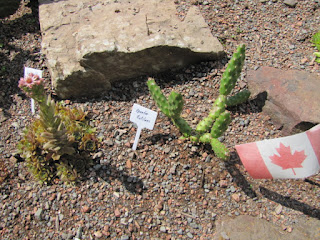 Opuntia rutilans' pads are shaped like sausages, they can be about 4" long and up to 1.5" thick.  This is one of the few prickly pears that have very few spines, usually at the tips.  Flowers are deep pink with extra petals, 3" across.  Mine has yet to bloom.  I am patiently waiting.... It grows rather quickly and can become quite a good size in a short period of time.
﻿ 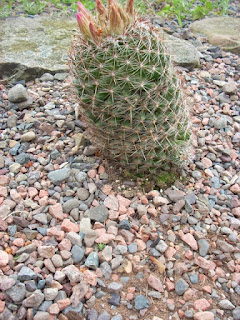 ﻿
Escobaria vivipara also known as Pincushion Cactus, Beehive Cactus, Ball Cactus and probably quite a few other names.  It is found in both Manitoba and Saskatchewan.  It is a nice ball shape, holding its form through out the winter surviving winters at - 30 C.  Beautiful pink blooms are formed in June at the apex of the cactus.  It propagates itself  by producing babies around the base of the mother cactus.  These maybe detached, allowed to dry and then planted like the Opuntias.  The Escobaria in the picture above bloomed two years in a row and got to a diameter of 5".  The winter didn't kill it, someone drove over it with a car.  Who??  At least I had some babies in the Greenhouse.

Another one I have are Echinocereus, Claret Cup Cactus.  No pictures at this time and no commentary, can't find them.  I know I took pictures and I was just researching them last month.  Can't find the notes.  I have wasted 2 days looking for them and I can't wait any longer to post this.  Echinocereus will be introduced at a later date.

They may be a bit shy.