I am not a collector, I don't need one of everything.  Some people may say otherwise. But I have been slowly falling for sempervivums (Hens and Chicks). 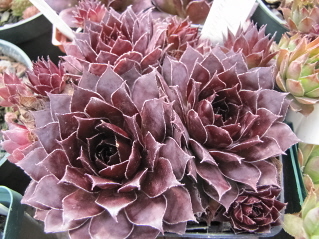 Sempervivum Black
They are also known as Houseleeks originating in the Alps of Europe.  They grow from rosettes of succulent leaves (The Hen) producing new plants (Chicks) in a circular patern﻿.   Usually grown in full sun and can tolerate hot dry conditions, they are great for rock gardens and troughs.  The old fashion ones can grow in light shade as long as they are kept dry.  I found that the hen tended to be larger producing fewer chicks. 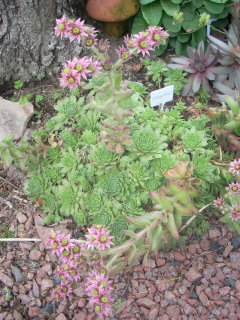 Sempervivum ciliosum var. borisii
They are not usually grown for their flowers although the individual flower is quite attractive.  The flower stalk however, ﻿has drawn a few giggles over the years from those with a slightly perverted mind.  The flower stalk is an elongation of the hen so one thing to remember is that once the hen makes the transformation to a flower, she dies.  Hopefully, she has had her babies before hand and her daughters usually spread to fill in the space.  Some varieties will bloom more than others. I remember seeing at a nursery a few years ago, a single hen blooming in  4" pots.  Whoever purchased those would not have had anything left. 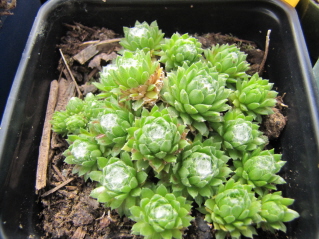 Sempervivum arachnoideum var tomentosum
Cobweb Hen and Chicks
And the great thing is they come in so many sizes, shapes and colours.  They are easily hybridized and grown from seed.  On the upside you get a lot of variation, on the down side it is difficult for a collector to be sure of the named varieties.  I currently have about 15 and have found a like minded person in BC that I am going to do some trading with this spring.﻿ 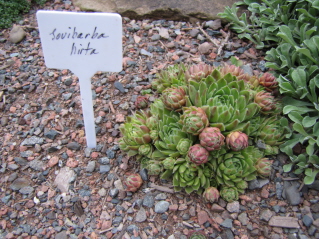 Jovibarba hirta
﻿Jovibarba grows almost exactly like sempervivum.They distinguishing features that keeps them in a separate genus is the flowers.  To the untrained eye they look alike, but taxonomy says different.  The chicks are also formed a bit different.  They are produced on thinner stems and tend to roll off when able to make it on their own. Hence they are called 'rollers'.  They are green with the chick being reddish until they mature. It is harder to get named varieties with Jovibarba then Sempervivum.  I currently have 3 types J. hirta I, II, III.  Until I find and expert in this genus, that is what they will be called. 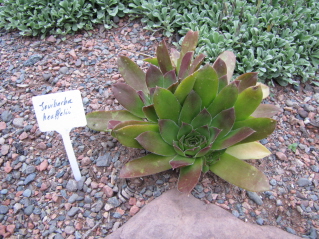 Jovibarba heuffelii
J. heuffeli are larger, very fleshy evergreen semp-like.  They do not produce stolons on which the chicks form but form new rosettes in between the leaves.  A sharp knife is required to separate them for multiplication. 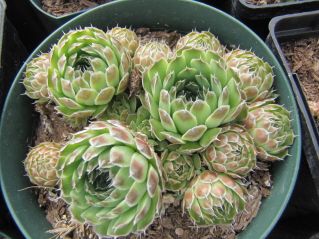 Orostachys spinosa
Again another semp-like plant, it folds on itself during the winter in a tight ball, gradually opening up into the summer.  It produces chicks at the base of the hen much like semps.
I am now on the look out for Rosularia.  Have just heard of them and I may be getting one in trade.  Again another form of a Hen and Chick.  Garden North has seed.  That is going on my April seed list.
Posted by Woodlands and Meadows at 12:45 PM